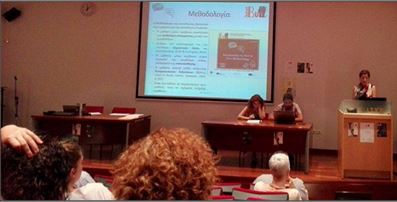 Successfully completed the dissemination Workshop of the European project SONET-BULL results with the title “The SONET-BULL training platform and its applications in education”, held on Wednesday, June 22, 2016, from 9.30 -14.00 at the Computer Technology Instituite and Press “Diophantus”, at the campus of Patras.
The workshop organized by the Computer Technology Instituite and Press “Diophantus”, partner in SONET-BULL project and the Hellenic Open University, which is the coordinating institution of the project. The central aim of the event was to disseminate the results of the project, as reported both in the educational SONET-BULL platform but also through research and policies against bullying presented by trained users of the platform.
The event welcomed the Director of Directorate of Telematics and Applications for Regional Development of CTI, Prof. Giannis Garofalakis. The overall goals of the project were presented by the Scientific Manager of the project, Dr. Achilles Kameas, the presentation of the educational platform was made by the administrator of the SONETBULL platform, Mr. Katerina Christoudolopoulou, and the SONETBULL training procedure was presented by the National Moderator of Education, Mr. Ifigeneia Sotiropoulou.. 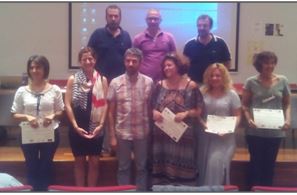 Invited speaker Mr. Theodoros Baris, Head of Scientific and Pedagogical Guidance of Directorate of Education of Western Greece, presented research data from School Managers on the problem of violence in primary and secondary schools in Western Greece.
In the event participated as speakers several users of the platform presenting policies and surveys have been carried out within the framework of SONETBULL, exchanging experiences regarding the training applications in various educational environments. Another part of the workshop was devoted to the Anti-Bullying School Network and the School Policies implemented by 9 primary schools of the region of Nafpaktos, which is established by the cooperation of the School Counselor Dr. Katerina Nikolakopoulou and the Hellenic Open University.
A highlight of the event was on one hand the awarding of core users of the platform for the completion of SONETBULL Training: phase A, and on the other hand, the awarding of participants at the Anti-Bullying School Network of Nafpaktos. Among the participants (40) were teachers, trainers, parents and school managers.
. 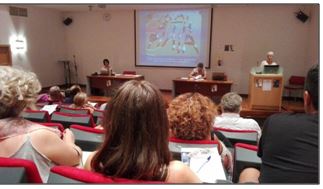